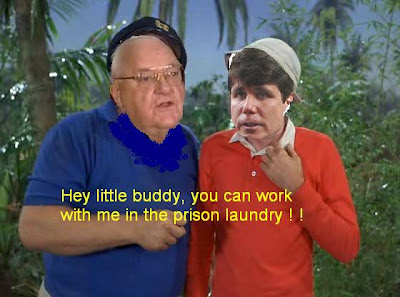 Have you ever known JJ (father/son) to miss a photo-op?

Fortunately, all of those dots connecting crooked politicians in Illinois don't connect to you know who: "Watching the Illinois State Senate judge...[Blago]...at his impeachment trial is like watching a swarm of flies condemn a brother fly for having dirty feet" (John Kass): http://www.youtube.com/watch?v=74VBrb89s5o.

Question: "Don't you ever stop picking on mainline denomination clergy?"

Answer: "No. Read Hosea 4. For mainliners, that's in the Hebrew Scriptures or OT squeezed in between Daniel and Joel."

Question: "Seriously, don't you think you should point out the hypocrisies in the others as well?"

Question: "While I like your self-deprecating comments and wish somebody would buy a bike for you already, don't you feel a little guilty about picking on them?"

Analogy from Q&A between Katie Couric and a Marine sniper:

KC: "What do you feel...when you shoot a terrorist?"

Staying on task, I went to the "Annual Pastors Appreciation Luncheon" of the Gideons yesterday.

I love the Gideons; because they worship regularly even if they've got something "better" to do, tithe more than tip, and enflesh Romans 1:16-17 along with 2 Timothy 4:1-5 along with other evidences of fidelity that seem to escape the radar of mainliners these days.

Gonzo journalist Hunter S. Thompson: "If there is a God, I want to thank Him for the Gideons, whoever they are. I have dealt with some of His other messengers and found them utterly useless. But not the Gideons. They have saved me many times, when nobody else could do anything but mutter about calling security on me unless I turned out my lights and went to sleep like all the others."

While I'm sure it does not matter, Thompson was born in Louisville, Kentucky.

Anyway, if you don't know much about 'em like most mainline congregations with pastors doing their worst to keep 'em ignorant, just go to www.gideons.org or check out the reference in www.wikipedia.org.

I got into trouble with an ecclesiastical bureaucrat in my franchise during the PTL scandals of the 80s for saying this after somebody said some bad things about 'em during a clergy meeting: "You're always picking on Jim and Tammy and Jerry and Bob and Billy and the like; but, geez, they've done more to point people to Jesus as Lord and Savior than you've ever done."

Maybe that's why I've never been elected moderator of any judicatory in my franchise.

Getting back to yesterday's lunch, there were only two mainliners at the, uh, table.

So I asked some folks, "Why don't I see more mainline clergy at the Gideons' 'Annual Pastors Appreciation Luncheon'"?

The responses were, uh, furious.

First, here's a quickie from my wife who was sitting next to me: "They don't really believe in the Bible anyway."

A professional interim near Chicago who sojourned with us for a while: "Top 5 Reasons: (1) They don't know what a Gideon is, not having read their Bibles; (2) They don't like fried chicken for lunch; (3) They don't know any Gideons because that is not part of their camp; (4) It seems stupid to support a group that distributes a book that you continually debunk; and (5) They are sooooooo busy trying to be on the cutting edge that they miss the cutting edge of the Sword of the Spirit."

My favorite newswoman in the South: "Because they are terrified of being asked a question about the Bible."

Tampa Bay: "They aren't sure who the Gideons are inasmuch as they are not on the PHEWA approved safe list of ministries. Maybe they know who the Gideons are and don't want to be tarred as some reactionary right wing bigot who believes in the authority and inerrancy of the Word."

Somebody who told a mainline ecclesiastical bureaucrat that he doesn't lose sleep over the franchise anymore because it's "irrelevant" to American religious life: "I am not sure that the Gideons engage them as much as they do others. It seems that their reps are not as aggressive with mainliners as they are with others...#1 may be the result of the concept that mainliners are so beholden to the idea of separation of church and state."

A demitted mainliner in South Carolina: "Ummmmmmm. Could it be because the Gideons only appreciate pastors who have more than an 'appreciation' for the Bible; who believe it is not just a container for the Word of God but IS THE WORD and submit to the Word as their authority for faith and life? Just a guess."

From somebody who is supposed to find a loaner bike for me to take the test in the spring because people think I'm jokin' about buyin' one that I can't afford right now without help to provide some occasional relief from it all: "The only reason I can figure out is the Gideons deal with the original source of all sound doctrine...That makes the two mutually exclusive."

A presbyter from a neighboring mainline congregation that is really, really, really in the KD mode of salting, shining, and sowing for Jesus: "Does anyone in the mainline care for winning souls for Christ anymore?"

A BSA executive in Oregon: "Many mainline clergy do not believe in the virgin birth, the resurrection, the miracles and so forth; so why would they go to a luncheon honoring a book and an organization that they don't believe in?"

The founder and editor of one of the most influential paradenominational publications/websites on the planet: "What do you expect? Gideons are conservative. Ever heard of theologically liberal people wanting to get people to read the Bible?"

A retired Stated Clerk (big shot in the PCUSA) in Florida: "To our shame, we dodge these wonderful men...There is no group quite like the Gideons...and don't forget their women's auxiliary: 'Wives of Gideons on our knees to keep the Gideons on their feet!'...I finally gave up on Presbyterians because most feel that if you don't have a Bible, just read the Koran or whatever is your national scripture!"

California: "Could it be because the Gideons, doctrinaire evangelicals to the core, do not allow the participation of...Mormons and this somehow offends the PC hyper-sensitive mainline pastors? Or could it be that mainline pastors are simply so aBiblical that being involved with a group like the Gideons is a contradiction in terms?"

Ohio: "Why would it be important to give away free copies of something that only occasionally becomes God's Word or is nothing more than the written reflections of human beings on some sort of encounter with God?...The Gideons talk about 'getting saved' and 'lost people' and being 'born again' and the reality of hell and all that fundamentalist stuff that is sooooooo embarrassing. Better you should show up at a 'women's reproductive rights' rally. It's more respectable...[in mainline denominations]."

Concisely, go back to the quickie on top.

The Gideons are helping people get to heaven and live confidently in the meantime.

The mainliners are leading folks straight to...

Gideons are friends of our greatest Friend: http://www.youtube.com/watch?v=B_L4epGowZU.

I am a mainliner PCUSA pastor for nearly 40 years, and liberal and have been attending Gideons Pastor appreciation suppers for close to 20 years in three different cities. So don't lump us all together. I do appreciate what they do, have invited them to my churches to speak and take an offering. I have their message stand in the back of the sanctuary of my current church. And I do not agree with everything they say and do, but hey I don't agree with anybody all the time....that's life.

Labels are notoriously imprecise; and I'm glad you pointed that out.

So, again, I'm praising the Lord that you're an exception to the rule!

If you're in my neck of the woods sometimes, call and I'll take you to one of our new advertisers for a cup of coffee.