Be that as it is, my sister sent it to me when it first hit the net; and I agree with her preface: "It made my day. It goes to show you that you can't judge a book by its cover. I wept while watching it."

Being out of commission for the last 24 hours after a trip to the emergency room to get medication for the cholesterol medication that caused an allergic reaction that inspired one of my covenant brothers to say I look like I have a bad case of leprosy and my wife to joke that I have the coodies to which I suggested I got it from her to end the levity, it reminds me of the unpredictably extraordinary grace of God to stun us by the irrepressibly incarnational expressions of the Spirit in and through us.

It caused me to think of two young pastors who are causing me to expand my old wineskin.

One has earrings for both ears; which has never bothered me except when it's a guy.

The other, uh, guy likes to blurt out in worship, "Religion sucks! Jesus saves!"

Generational issues can get in the way of advancing the Kingdom.

"Suck" has sexual connotations for my generation; and when that part of sexual intimacy loses its appeal like those tattooed roses peeking from low-cut blouses that have become long-stemmers over the years, it becomes especially repulsive; which, drawing a parallel, may be why geezers like me refuse to accept the evolution of "sucks" from its sexual connotations to just meaning something is really awful.

Anyway, the guy with the earrings and guy who says religion sucks but Jesus saves are attracting more people to their worship services than guys like me who've got their grammar, oral tradition, and personal affects in order.

It makes me think about what my sister liked about that video in the first section of this KD.

Speaking of not judging a book by its cover, my favorite newswoman in the South sent this to me:

FROM THE FIRST BOOK OF DEMOCRAT : 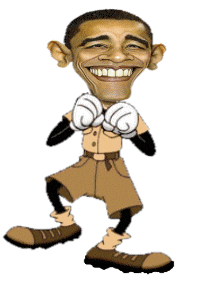 OBAMA IS MY SHEPHERD, I SHALL NOT WANT.

HE LEADETH ME BESIDE THE STILL FACTORIES.

HE RESTORETH MY FAITH IN THE REPUBLICAN PARTY.

HE GUIDETH ME IN THE PATH OF UNEMPLOYMENT.

YEA, THOUGH I WALK THRU THE VALLEY

OF THE BREAD LINE, I SHALL NOT GO HUNGRY.

OBAMA HAS ANOINTED MY INCOME WITH TAXES.

MY EXPENSES RUNNETH OVER MY INCOME.

SURELY, POVERTY AND HARD LIVING WILL FOLLOW ME ALL THE DAYS OF HIS TERM.

I AM GLAD I AM AN AMERICAN,

I AM GLAD THAT I AM FREE.

AND OBAMA WAS A TREE.

She said, "You can tell your readers that it can be found in the Bible right after First and Second Babylonians."

He reminds me of so many of my young professors in college and graduate school who had a lot of really cool ideas to heal a world that ain't interested.

Yeah, his rhetoric and administration don't match up; but, c'mon, take a look at churches.

What they say they believe about peace, unity, and purity doesn't often match up with what they do about it.

Come to think of it, I can be pretty hypocritical too.

I'll call 'em Del and Dan because that's their names.

I really ____ed (Go back to the bad word with sexual connotations for my generation used by the young pastor in the third section of this KD that his generation uses to indicate something/someone is really awful!).

Anyway, I got home after really ____ing at golf today and got a package from Titleist: a dozen Pro V1 balls with "Kopper" inscribed on each one.

It was an anonymous gift.

I know that because Titleist doesn't know my dog's name.

I have written ad nauseum about how much I detest the cruelty, cowardice, and terrorism of anonymous calls, letters, and the like; so much so that I don't read letters that do not have a return address or signature.

If anyone out there would like to send an anonymous cashier's check or something like it to help me pay off...

Everybody can be a little or lot hypocritical every now and then.

As Katie Couric slipped the other night, PBHO is still on his learner's permit; so let's cut some slack and pray he doesn't do anything else that really ____s.

Which brings me to the latest from Meghan McCain!

The more she talks, more and more folks who voted for her daddy are glad he didn't win.

You can't have it both ways.

You can't say you don't like PBHO because his formative political/philosophical/ideological years were influenced by loonies and then fail to admit Meghan's daddy is at least partially responsible for her being so, uh, loony.

Regardless, which is how some people go through life anyway, she said on Monday, "PBHO...is against gay marriage - a dirty little secret many of my gay friends are shocked to discover. But you'd never know it because he always 'sounds' so inclusive...And just like the civil rights and feminist movements before this, the movement toward gay equality and gay marriage is one I have absolute faith will triumph over prejudices. Moreover, I believe the Republican Party has, at this moment, the opportunity to come forward and play an instrumental role in securing gay rights...And yes, I'm still a Republican. Get used to it."

She's picking up a, uh, partner in Rick Warren.

Parenthetically, abstentions acquiesce to the majority in parliamentary procedure.

He's backing off the issue because, well, uh, he's gettin' real close to this administration; and just like other clergy throughout history who have sold parts of their souls to get close to...

I'm getting off the subject; kinda like the Republicans when Meghan McCain starts speaking for 'em.

Speaking of who speaks for whom and stuff like that, I wrote this yesterday:

I am writing to you to review "The Bob Rule" which has
helped me over the years.

I did not invent this rule; for if I did, I wouldn't have the
debt that no rich aunt [or anonymous donor akin to the
fifth section of this KD] has helped erase from my
credit report.

No, it's a rule that therapists often invoke when dealing with
folks who fail to see the logs in their eyes as they point
out the specks in the eyes of others.

You are not getting this for any particular reason.

It's one of my mass mailings.

So, quite frankly, I don't know why you're gettin'
this.

Calvinists may hazard a guess.

Moretheless, here's how it goes.

Parenthetically, it has never happened to me as
a professor because professors hand out grades
that stay on transcripts forever and few folks have
the guts to challenge their professors and maybe
mess up their transcripts that are so important
during job interviews.

One of the most defining moments in my life
and ministry occurred when I realized I may
think I'm right but that doesn't mean I am right;
and when everybody tells me that I'm wrong, it
makes sense to think about the "possibility"
to "probability" that I may be wrong.

Simply, hanging on to thinking and acting like
you're right when you're not as evidenced by
The Bob Rule is rather silly and makes a person
look even more foolish than ever before.

Releasing ourselves from the auto-suggested
hallucination of always thinking we're right when
we're not can be so refreshing as it sheds the
weight of being so wrong about thinking we're
so right.

It's O.K. to be wrong - everybody's wrong now
and then which is why Jesus came to save us! -
but it's not O.K. to keep pretending you're
right when everybody knows you're wrong.

There are places for those kind of people.

Of course, I may be wrong about all of the
preceding.

I think of Harold.

Harold was my associate in Pennsylvania.

He's an AGer; and when folks asked why we didn't hire one of our own, I said, "We couldn't find any who still believe in Jesus."

Be that as it was at the time of our search, a woman accosted him for "preaching about her" during a sermon.

His response: "It's really quite arrogant of you to think that I write sermons just for or about you; but if the shoe fits..."

Some folks have already, uh, weighed in on The Bob Rule.

My favorite devotional writer in Oklahoma: "Reminds me of the old saying, 'I was only wrong one time in my life, and that was when I thought I was wrong, but I was really right.'"

A really smart pastor in the Midwest: "I've heard The Bob Rule like this: If Bob has a problem with everyone else, Bob is the problem."

From an elder in New Jersey: "I think it was abnormal Psych 101 in which I learned that if you are always alone on the opposite side and the rest of the world thinks differently all of the time, you are definitely in need of help...Unfortunately, most of the people who wind up in this situation have no clue that they need help."

From California: "The corollary to The Bob Rule: 'You are always entitled to an opinion but having one does not make it correct.'"

Speaking of people in the ozone layer of reality with two feet planted firmly in the air, VP JB reported (via the White House yesterday) an adjusted gross income of $269,256 and paid $46,952 in federal income taxes.

Obviously, VP JB has discounted the tithe to less than 1%.

The White House: "The charitable donations claimed by the Bidens on their tax returns are not the sum of their annual contributions to charity...They donate to their church, and they contribute to their favorite causes with their time as well as their checkbooks."

A song comes to mind.

I really liked Cat Stevens until he became Yusuf Islam and wanted to knock off Salman Rushdie.

Rumor is he's raising money for his ragheaded terrorist friends.

Hypocrisy - contradicting rhetoric and administration - seems to be one thing common to all political parties and religions.

That young pastor is right.