She had been around and in and out of many churches before coming to ours about seven years ago.

She offended a good friend, often mentor, and visionary elder on the corner of Lincoln and Main by referring to me as a jackass.

He came to me and complained about her referring to me as a jackass: "I won't tolerate anyone calling my pastor a jackass."

I said, "Well, uh, while I don't think I'm a total jackass, I think I can be something of a jackass every now and then."

There are three sides to every story: her side, his side, and the truth.

I can be something of a jackass every now and then.

Keep that in mind as you read on.

I had jury duty again on Monday.

Last time was back in 2012; and you can read about it by going to the right column, clicking on 2012, and then clicking on "Jail or Jury Duty for Pastor Bob on September 19."

Haven't changed my mind on much of what I wrote back then; but I've got a few more amplifications along with a strategy for permanent disqualification for ever being called again for jury duty.

We had to report by 9:00 a.m. so we could sit around for about an hour before they showed us a film about the privileges/responsibilities of serving as a juror.

Like church meetings, they hold up everybody else for people who think it's rude to be on time.

I felt patriotic when hearing about other countries that don't have jury systems/opportunities.

Looking around and within, I grew anxious when they talked about the jury-of-peers thing.

I felt kinda important when they said jurors are more important to the judicial system than lawyers and judges; but then noted we were getting $12 a day and $.10 mileage and wondered who they thought they were kidding.

Lots of waiting around.

Then we went home because they didn't need us.

I figured there were several reasons why it was a mistake to call me for jury duty; assuming any of 'em would disqualify me:

1. I'm a pastor.  I thought that separation of church and state thing would knock me out.

2. I'm a professor.  There are people who talk about doing things and people who do more than talk about things.  I didn't think they wanted a professional BSer.

3. I'm a police chaplain.  I counsel and care for police officers as well as work with and for 'em.  If that doesn't make me a bigot on the side of law and order,...

4. I've got this distrust of lawyers; knowing they service whoever's paying 'em without much real regard for truth, justice, and the American way.  Kinda reminds me of another profession...

5. I worked on the campaigns for a local judge and the state's attorney.  If that doesn't make me a bigot on the side of law and order,...

6. I'm a Christian.  Aren't we disqualified from most kinds of public service these days?

7. I can be something of a jackass every now and then.

None of that worked. 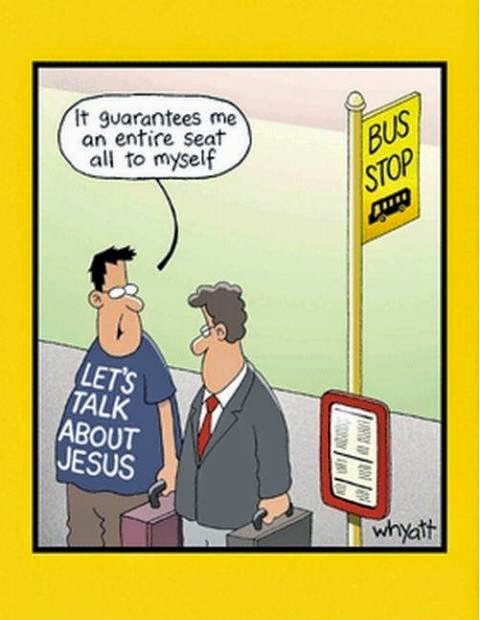 Here's my strategy for permanent disqualification for ever being called again for jury duty.

One of the other jurors was wearing a T-shirt that expressed her feelings for the occasion: "Just Another Day in Paradise."

That gave me the idea to get a T-shirt with "Let's Talk About Jesus" on it.

If you make one up for me, I promise to wear it.

I couldn't return on Tuesday to sit around wasting more tax $; so they rescheduled me for December 15.

I will wear a nice blue blazer so as not to appear too contemptuous and maybe, uh, maybe, uh, be permanently disqualified for ever being called again for jury duty.

So what the heaven does this have to do with remnant?

It's all about talking about Jesus whenever and wherever with whomever.

I really want to be held in contempt for that by people who don't love Him by the book.

Annnnnnnd now you also know why I wasn't offended when she referred to me as a jackass.

Things like jury duty and denominational jingoism/idolatry bring out the...in me.

Violating some--but not even half--of the Ten Commandments and being convicted of the violation will also disqualify you! It is an interesting question of which ones will disqualify you!

Some of the voir dire questions are absurd and if answered honestly would take out all the jurors. My only jury trial I asked the whole panel if they had ever been in an auto accident. No hands went up. Several questions later one prospective juror put up his hand to say he had been in an accident once. Little by little many jurors reflected back on a lot of the questions and basically said mea culpa. Maybe I should have started with, "Is anyone a sinner here." No hands go up so I know I just got a panel of angels. One guy finally said he had had a slight run in with the law. The judge queried him and it turned out he was a convicted felon and had been in the slammer. The judge was quite put out that the screening downstairs was so flawed.

Oh, brother, your acuity humbles me! Kathie must post this one!

Hey, Dr. Bob!
Cool idea for T-shirt. It's the O's colors, so after you get it and wear it, I'll borrow it for when I go to a game next summer!