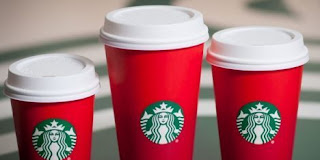 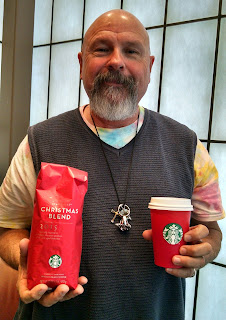 @#$%
While riding home from a meeting of Blackhawk Presbytery, I listened to Elton John's Madman Across the Water.

Anyway, I'm sure ideological fascists are befuddled by my tastes in...

I stopped for coffee; after all, I was coming home from a clergy meeting.

While drinking Christmas Blend in one of their non-descript red cups, I thought about the irony that has infuriated the ideological fascists about those red cups.

Americans have the luxury of asinine drama.

Around the world, people are wondering if they can feed their children or if some Islamofascistnutball is gonna chop off their heads.

Americans are OCD about their deodorants keeping 'em dry all day long.

Presbytery comes back to mind.

Essentially and gracefully - all things considered - we let another church leave.

They are free and clear to run off to another denomination that doesn't stink as bad as our's does right now but will in a few years.

Never gets so good that it outgrows the need for Lord Jesus as Savior.

Some will exit faithfully.

Some will remain faithfully.

As for me, I will go down with the sinking ship because...

The cross comes to mind.

He said, "If anyone would come after Me, let him deny..."

Well, you know how that goes.

If you're a Presbyterian or in a sister mainline franchise and can't complete those sentences because you don't, find a Bible with red letters in it and read 'em.  It won't take more than an hour or two.

Getting back to the presbytery meeting, it was really great.

It was really great.

People even mentioned Jesus by name.

O.K., two interims who, I think, were attending their first meeting had an awful lot to say.  They even lectured us on some stuff; bringing to mind a pastor long ago who was as old as I am now: "Bob, you've got to earn the right to speak at presbytery."  If I have to explain that to you, you wouldn't understand anyway.  Obviously, the two new fellahs don't.  Maybe that's why they're interims.  Maybe that explains Trump.  Don't know.  Your guess is as good as mine.

Just goes to prove that unless you're a hyper-Calvinist, anyone can be saved because Jesus wants everyone to be saved.

The red cups don't bother me.

I guess that says a lot about me - good, bad, and otherwise.

Can't wait to hear from the ideological fascists.

You like the cups for the same reason I like the cups - its ALL about Jesus...
http://carmenfowlerlaberge.com/2015/11/10/starbucks-red-cup-bears-the-real-meaning-of-christmas/

Red is the color of the blood that flowed
Down the face of someone who loved us so
He's the perfect man, He's the Lord's own son
He's the lamb of God, He's the only one
That can give us life, that can make us grow
That can make the love between us flow

Jesus does care about cups, but the cup he cares about has nothing to do with Christmas or coffee. The cup Jesus is most concerned about is the cup of commitment, not the cup of complaining.

I dislike the shaming of two speakers on the floor of presbytery. Whether interim or installed, ruling or teaching elder, young or old, first or fiftieth meeting, we were all called present and charged with discerning Gods grace and will. Shaming or silencing voices does not help us hear God!

If you have Jesus in your Heart. Color does not madder.
God Bless

None of the prior cups at SBux hard Jesus on them. The visceral response is push back against the secular war on Jesus. That explains it. While the Progressives are passionate about erasing Jesus from every vestige of our culture, must we meekly accommodate their demands? No. The incessant and puerile Progressive agenda advances where we do not resist. I order SBux and tell them my name is "Merry Christmas". That forces them to say the words so I can come get my cup. Sweet push back