"God is doing something good through everything that happens in the lives of the faithful.
If it seems slow, don't panic.  You will see!  In whatever meantime this is for you,
trust Him.  He has something better than you could ever imagine.  Trust Him!"

It's been 42 years since I was with my mom on her birthday.

Come to think of it, I haven't been with my mom on Mother's Day for 42 years...or my mom, dad, and sister on Christmas Eve, Christmas Day, Easter Day or...for 42 years.

Guys like me are supposed to make the season(s) "bright" for everybody else.

We wouldn't think of missing...if we harbor any sense of job security.

That's probably why I'll catch some flack for missing two last minute church calendar additions next week; though I've been planning to spend my mom's birthday with her for months...for the first time in 42 years.

People say, in effect, to guys like me, "We want you to take care of your family; but you better not let any of their needs come before any of our needs."

Yeah, I know lots of people will say that's not true; but it's true.

Anybody doing what I do knows it's true.

I played golf with him on that day and got the only hole-in-one of my holy hacking career.

My home pastor - The Rev. Harold F. Mante (RIP) - explained all of this to me before college, seminary, ordination, and...

I knew the script; and now I'm living it. 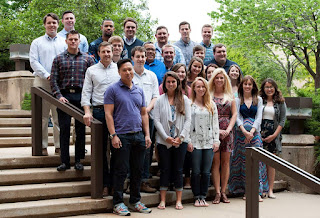 I thought about that while helping Dan move from Coe to KU last week.

He had planned and worked so hard to become a professional football player.

You can read more about the particulars by clicking on the September 6, 2015 edition of www.koppdisclosure.com.

As Habakkuk and Paul predicted for everyone who trusts Jesus, Dan knows he is where he's supposed to be by God's providence.

He's excited about Kansas University and becoming a lawyer.

He believes he can honor God by being the best lawyer that he can become.

He's not complaining about not becoming a professional football player.

He knows God has something better in mind.

He knows becoming a lawyer is God's best plan for him.

Yet, he'd be lying if he said he doesn't muse every now and then about...

When we drove with Dan to KU, some of mine came to mind.

42 years of never spending any holiday or any...with my mom, dad, and sister.

I talked about that with one of my newest and bestest friends over pseudo-Cubans not too long ago.

After leaving Eugene and admitting I'm just scratching the surface of my relationship with God back in October 2011, I've lost the need to offend anyone anymore anytime about anything anywhere by intention.

I'm saltier than ever before.

I want to shine and leavenate for Jesus more than ever before.

But I don't want to hurt anyone anymore anytime about anything anywhere.

Winning and getting over and hurting by plan/lust/intention and the like have left me.

So, for the most part, I'll keep the regrets to myself...or use 'em homiletically or therapeutically as needed/necessary.

Too many regrets involve people who've been hurt by my omissions/commissions; and just mentioning 'em could tear at scabs and open old...

He was an Olympic Gold Medallist at the 1924 Summer Olympics in Paris.

The movie about his life and early years of ministry - the 1981 Oscar-winning Chariots of Fire - continues to inspire so many of us; and I weep whenever I watch the last scenes of that movie as Liddell overcomes enormous odds in the race of his life because God calls and empowers people to be/do what He has in mind for them.

Indeed, his life incarnates Isaiah 40; like all lives - like Dan's - who trust God in a Habakkukian and Pauline kinda way.

Anyway, as Liddell was reflecting on his journey to gold and the sacrifices to get there with a foreboding of sacrifices to come as a missionary, a friend asked if he had any regrets.

That's why I'm more excited for life and ministry than ever before.

Not as many as me because I've lived a lot longer.

That's why he's so excited about law school and...

He always has something better for everyone.

So often we try to convince our pastors that the harder they work on our behalf, the more God will be pleased, yet is there any scriptural support for such a statement? You have always been selfless and helpful to me as I try to answer a call that few can see or understand, and even though I may selfishly forget to ask you what you need or to say thank you, I am still deeply grateful!. I have so much to learn from your example. Enjoy your time with your mom. You and your family are in my prayers.

Let each of you look not only to his own interests, but also to the interests of others.--Philippians 2:4

Every other Christmas and Thanksgiving I go to Alabama and leave the ministry to my team. They get the same options. God first, family 2nd and the grove is always in 3rd place in my life! It has pissed some people off but I won't stand before them and give account! I don't expect them to get it cause they are usually the workaholic types or the ones who never have taken on greater responsibility in life.

Well said... "Have a good weekend" is the one that has gotten me for the past 30 years. Right.

Yes, it is a gift, this calling. But.

I can't watch the movie. The theme was the departure tune at a wedding I was part of years ago, and the movie was the setting for my first date with the person I was at the wedding with.

But it's a HECK of a story. Another that is notable is Sandy Koufax refusing to pitch on Yom Kippur. And he wasn't even terribly observant.

I notice that Tim Tebow played every Sunday that he could...

Sooooo true!!! Only someone in the ministry can fully appreciate all that you just said!