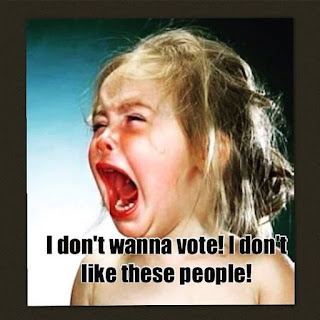 I have close friends who are voting for Hillary because they cannot vote for Donald.

Other close friends are voting for Donald because they cannot vote for Hillary.

I have one friend who will write in Jesus on the ballot; but because I'm convinced America would assassinate or crucify Him because He's so out of step with our culture, unlike Hillary and Donald, I may write in Ben or John.

Unless you're like most Democrats and Republicans that would vote for Satan if it were your party's nominee, you may want to stay home and fahhhhgettttaboutit.

Parenthetically, if you've been reading recent editions of KD which most have not, you know I can't vote for Hillary because she's a criminal and I'm not inclined to roll the dice with Donald.

What's someone who still cares about America to do?

I'm hoping Hillary and Donald will pick running mates that are not criminals or rolls of the dice.

Then I'll vote for the best one in keeping with American values built upon Holy Scripture.

Uh, yes, you pandering politicians and educators and entertainers and media types and clergy only coincidentally related to your ordination vows, American values were built upon Holy Scripture and He is calling, "Return to Me and I will restore you.  If not, not."

I think I've figured it out and confirmed it via some unscientific polls.

There are lots of women - left, right, and middle - who have been so abused by men over the years that they'll vote for a criminal as an in-your-face-payback-is-a...to men; and there are lots of women and men who will roll the dice because they're so put off by the current collection of pathetically pandering, spineless, and selfish GOP Congressfolks and Senators.

I may be wrong; but I don't think I'm wrong about the awful choices before us.

So I'm waiting to see who they pick as running mates.

If they pick reflections of themselves, which is quite possible because both are such insufferably shameless narcissists, I'll write in Ben or John.

This biblically minded retired pastor will hold his nose and vote for Trump. Why? Two words: Supreme Court. We know what kind of justices Clinton would push. The braggadocios Trump offers us the best chance of a Supreme Court that judges according to biblical values. Forget third party or writing in Daffy Duck: staying home or writing in someone is a vote for Clinton and progressive values.