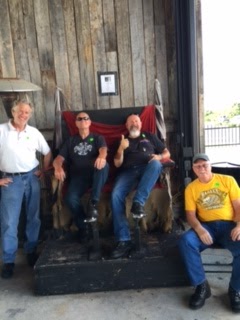 “Children, keep yourselves from idols.”

Jesus is being quoted.

Considering He is God, we may want to…

Bikers have a favorite rejoinder for people who don’t get it: “If I have to explain it to you, you wouldn’t understand anyway.”

Truly, the same thing goes for Americans who still believe our nation’s ethics and expectations were founded on Jesus by the book when they try to talk about American values with people, especially Democrats and Republicans who would vote for satanos itself if it were their party’s standard bearer, who increasingly conspire to distance America from the nation’s ethics and expectations founded on Jesus by the book.

The preceding are the kinda thoughts that run through the mind when on my iron pony and not distracted by cellulars, disks, and…

What follows are just a few more thoughts from my most recent mandatory ride through the Smoky Mountains of Tennessee with brothers who get it/Him/America.

Remember, KD does not beg agreement or affection.

I’d just like you to start thinking a little deeper about why America and her churches are going to hell before it’s too late to recover.

I remember someone saying, “If Jesus were to come back and see what’s being done in His name, He’d never stop throwing up.”

Does anyone really think Jesus incarnated, taught, suffered a miserable sacrificial death, rose, and reigns as God to enable the kinda arrogant and condescending and idiosyncratic distinctives of sects and denominations?

God knows there ain’t many Eugene Carson Blakes around anymore.

Pride in being different from others.

Let’s get this straight.

All lives matter to Jesus by the book.

Anyone modeling and enabling distance and divorce from other parts of humanity is a narcissistic idolater.

Instead of celebrating being a Democrat or Republican or Socialist or Baptist or Presbyterian or Lutheran or Catholic or Methodist or Pentecostal or Episcopalian or any of the rainbow colors or whatever, isn’t it more appropriate to lament such idolatries?

God have mercy on those who model and enable ‘em.

Jesus came to bring people together in, through, and for Him.

Again, He must be puking as His Church continues to be splintered by political and religious clubs that just don’t get it/Him.

You’d think we’d get it/Him after so many years.

Some people are just ignorant.  They don’t know any better.

Baaaaaaahhhh!  Baaaaaaahhhh!  Some people just wander off into bad stuff and follow the wrong leaders because they don’t pay attention to the Good Shepherd and His undershepherds.

Some people are just irregular, irascible, and irreconcilable.

Some people just don’t care.  Give ‘em a six-pack and Dancing with the Stars or a Bears/Packers game and they’ll be just fine.

Some people are part of the anti-Christ conspiracy to destroy the Church and America built on Jesus by the book.

Fortunately, there is a remnant.

I’m just hoping/praying the deal with Abraham and God in Genesis 18 is still on the table.

My wife is a better woman and mother than I can ever be.

I’m a better man and father than she can ever be.

Nobody can avoid it.

Question is not how to avoid rain; but whether we have the courage to ride through it with the smile of manhood generated by trust in Him.

That’s a disappearing character trait in increasingly feminized America and her churches.

Simply, are you going through life with a hot water bottle and depending on your helicopter…or umbrella…or…are you holding on to the hand of Jesus as you…?

We learn that during every mandatory ride.

We learn human interdependence in a Romans 12 and 1 Corinthians 12 kinda way with ultimate dependence upon Him in a Psalm 46 and 62 kinda way.

We learn God made us to depend upon each other as a big part of depending upon Him. 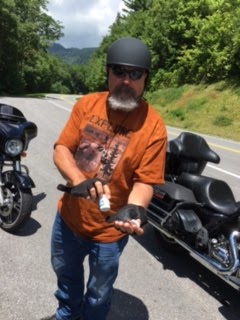