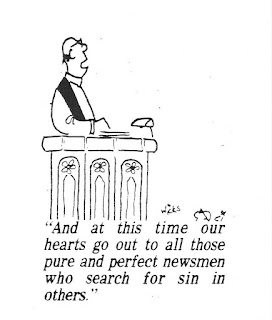 Back in February 1977 when I was making the circuit of neutral pulpits aka ecclesiastical meat markets to hawk my wares, land a job, and prove the previous seven years of college and seminary were worth it, I preached in a franchise church in Oil City, Pennsylvania.

Because Dr. Macleod taught us in every homiletics class that it’s not only not rude to be on time but we should always arrive at least an hour before worship so that we’re prayed up, calmed, and ready to go, I got to town about two hours before my advertising and their inspecting and had breakfast in a local diner.

That’s where I came across a cartoon that I’ve kept ever since that reminds me not to be a speck-inspector when I’m log-impaired.

Specifically, it has a bald pastor introducing prayer from a pulpit, “And at this time our hearts go out to all those pure and perfect newsmen who search for sin in others.”

As I’ve watched President Trump joust with media who are so quick to highlight the lowlights of whatever dirt can be dig up about him, I’ve often wondered about them; recalling another warning from Jesus about the mercy to be received will be determined by the mercy extended.

I also remember Sproul, a theologian who lived not too far from Oil City, who often said, “Pray for mercy!  Don’t pray for justice or you may get it!”

Besides, I’ve also learned over the years that lots of people who are busy pointing out the sins in others are usually hiding some juicy ones of their own in the Lombardi strategy of the best defense being a good offense; or lighting fires in somebody’s else’s backyard keeps people from seeing your house is burning down.

Simply, I don’t think our President’s past, present, and future will be judged by the only Judge who counts as that much better or that much worse than ours.

So it hasn’t bothered me at all when the President doesn’t take questions from people who are always looking for the bad in him; or as I tell young pastors, “You must love everybody; but you don’t have to smoke cigars with ‘em.”

Frankly, there’s more and more and more fake news out there being generated by people who don’t tell the truth about anyone or anything.

People in churches and most organizations know how that goes.

Really, there are people in our world and too often worldly church who don’t really care about those rules in Exodus 20 and throughout God-breathed revelation; for they say, in effect, “I know that’s what Jesus and the Bible say, but I think…”

How do you think our church as well as nation and world got into such a mess?

Sooner or later and definitely in the end, God does not bless those who dishonor Him as personified in Jesus and prescribed in the Bible.

Yeah, I find myself laughing every now and then that Trump is the 45th; though the last two or three or four or…have proven anyone can grow up/down/around to become President of the United States of America.

Yet, I’m among those Americans who believe it’s important to respect the office and trust whoever gets into the Oval Office until they prove they can’t be trusted.

Unfortunately, our media has been more about inventing news or managing news or ideologically filtering news than reporting it in recent years.  O.K., maybe they’ve always done that; but, eschatologically, it seems to be happening with greater intensity and frequency as of late.

I’ll never forget talking with the editor of what she thought was a major newspaper about fifteen years ago.  I asked why I hadn’t seen anything about the Confessing Church Movement in the paper; noting it was a very popular movement in our denomination to bring Jesus, Bible, and holiness back into the mainline.  She said, “As you know, I’m an elder at ___ and I’m against the Confessing Church Movement.  That’s why I’ve not run stories about it.”  I said, “I thought your job was to report news instead of deciding what news is good for us.”  Come to think of it, we never talked again.

I guess it all comes down to this.

President Trump will be judged - eternally by God and existentially by everybody else – by his trustworthiness.

Media will be judged in the same way.

You decide who’s ahead right now.

While I join you in doing that, we may want to take a long look in the mirror.

One of the lessons that I learned from Victorious Ministry Through Christ is to dump your garbage before someone digs it up.

That means it’s better to confess before getting caught.

People who are caught are never really trusted again.

Of course, VMTC got it from the big ten and Jesus who inspired the wisdom, “Tell the truth, the whole truth, and nothing but the truth.”

He went on to say, “Anything more doesn’t come from God!”

“Your word,” He said, “is enough.  To strengthen your promise with a vow shows that something is wrong.”

Christians don’t need to say, “I swear I’m telling the truth…To be honest…You can trust my word…Let me be honest…Cross my heart and hope to die…”

Christians are honest by definition.

When people spend too much time spinning or rationalizing or making excuses and blaming society, poor potty training, and that Hillary lost and Donald won or something or somebody else for their bad behaviors, everybody, especially God, knows they’re lying and nobody trusts liars.

It’s the truth about the truth.

If you tell the truth, no one has to guess or gossip or continue to distrust.

Time will tell with President Trump.

Time has already told with too much of today’s media.

I’m reminded of a doubles tennis tournament many years ago in Kansas City.

During the first few rounds, we played by the honors system.

Well, I hit an ace right down the middle and on the line.

Immediately, one of our opponents yelled, “Out!”

“Out?” I shouted incredulously and began to rush the net.

My partner stopped me and said, “God knows!”

It’s the only thing that matters in the end.

He’s the only One who matters in the end.

He’ll be the Judge that matters most for President Trump, media, you and me in the end.

In the meantime before the end of time, it’s still true.

Look up! Stand up! Speak up! Act up for Jesus!