Live your life in such a manner that your pastor won't have to lie at your funeral or lead the handful attending in, "Ding!  Dong!  The...is dead!"

Did you hear about the obituary in Texas back in February written by a daughter about her daddy?

The obit was so popular that it crashed the funeral home's website.

Later, the daughter explained, "I told the truth...For someone that knew him and family members that knew him, and to see something on there was a complete lie, would've been an insult to everyone that he did bad things to and there were a lot of them."

I wonder if that'll start a trend at our local favorite funeral home.

Anyway, in a people-are-strange-Jim-Morrison kinda way, that obit made me think about an American funeral.

Acknowledging America has always been divided and only God's grace has allowed us to hang around longer than expected and much longer than we've deserved, we seem more divided than ever before.

Many prognosticators contend America has passed the tipping point.

For example, Dan Pope, one of my favorite pastors in town at Open Bible Church where I recommend folks emigrate who hate me for Christ's sake, gave Barna Trends 2017 to me at Starbucks on February 15 which isn't important except to say we're trying to leavenate that joint as much as possible because Jesus said to take the gospel into the world and Starbucks is about as worldly as you can get these days.

The Barna Group provides current and accurate information, in bite-sized pieces, to facilitate effective decision-making.  Barna Trends is an annual guide to the latest cultural, religious, and political trends that help us to understand what the heaven isn't going on.

Parenthetically, for those who think it leans one way over the other in reporting "the facts, ma'am, just the facts," its research stats, commentaries, and conclusions are often quoted across the ideological spectrum by major media outlets like CNN, USA Today, The Wall Street Journal, Fox, Chicago Tribune, Huffington Post, NY Times, LA Times, and the BDR that seems to have stopped publishing my stuff now that it's changed editors again.

Among the most disturbing trends in this latest volume is 72% of Americans - cutting across race, faith, left, right, up, down, rich, poor lines - think America is going to anywhere but heaven.

Founder Barna himself concludes, "Voters are perhaps as upset with themselves as they are with the system...They know something substantial must be done, but either they don't know what that prescription is or they don't have the courage to pursue it...Many resonate with the sense that America has lost its mojo."

While I may be wrong, I think the church and politicians are mostly to blame.

Democrats and Republicans care more about their respective partying than America's health and welfare.

Neither blush when they say, in effect, "Come, let us show ya'll how we can't get together for anyone's sake...not to mention God's."

Though it's not PC and rather crude, I've reached a simple conclusion.

Gump is right: "Stupid is as stupid does."

Kurt Vonnegut in Palm Sunday comes to mind: "An Indianapolis cousin of mine, who was also a high school classmate, did very badly at the University of Michigan while I did badly at Cornell.  His father asked him what the trouble was, and he made what I consider an admirable reply: 'Don't you know, Father?  I'm dumb.'  It was the truth."

America and her churches, politicians, educators, pastors, pewsitters, merchants, entertainers, media types, lawyers, judges and all of the below look so stupid because they have turned their backs on the only One who can save us.

We've heard it before and we must hear it again because it's the only truth that can deliver us from all of the fake news being barfed up by today's Democrats, Republicans, denominations, so many incredulously secularized pastors and other politicians: "The Christian ideal has not been tried and found wanting.  It has been found difficult and left untried" (G.K. Chesterton).

Samuel records the truth: "God blesses those who bless Him."

The answer is so simply straightforward. 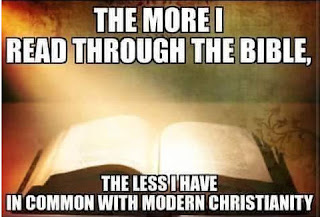 Is that why we say on markers, "Here lies...(John Doe)? I have ideas about how funerals should be conducted that have made the local funeral director so mad. that he avoids me and rarely comes to my funeral services. Also, in Jesus day, mourners were hired to come and cry. We don't do that today. Instead we pay funeral directors and pastors to cry for us

This is the answer, always has been, always will be...Jesus! Jeremiah 2:13..."For my people have committed two evils: They have forsaken Me, The Fountain of Living Waters, To hew for themselves cisterns, broken cisterns that can hold no water."

I pray that the Holy Spirit will woo and guide the Church(es) back to the Source of Light and Truth...and our salvation!

When my father died six years ago and - going to read his will with his long-time pro bono attorney - found out that he had chosen another attorney to represent his estate AND excluded any of us kids from getting any thing. -

And learning not long afterward that the Director of said Society had embezzled thousands - including, I presume, a portion of my father's estate...

Anyway, I planned and led a memorial service for him (which he may have wanted but eschewed outwardly)

I wrote as well as I could his obituary.

"That makes it a son-of-a-bitchuary, doesn't it?"